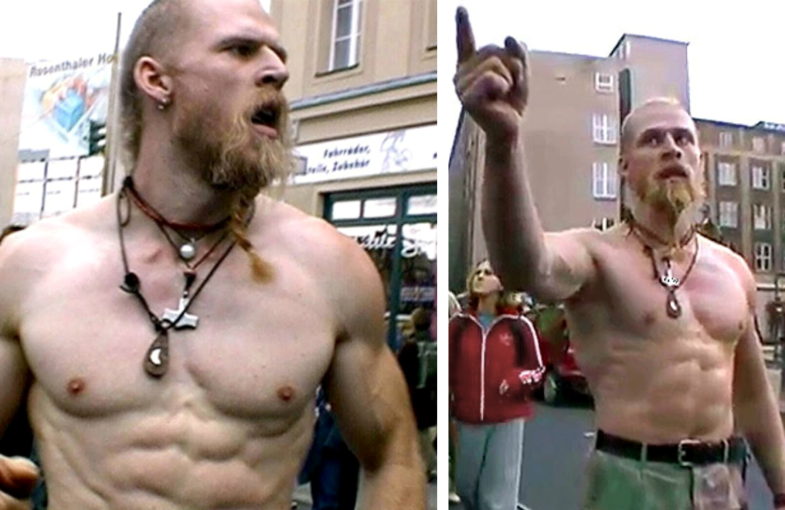 I think this has to be one of the best videos online. If you have no idea what I am talking about, then let me just clue you in a bit.

The Techno Viking, is an individual who happened to be captured on video, while at a music festival/parade/techno street party, called Fuckparade, in Germany in 2000. You have this highly muscular man, totally topless, dancing to techno music as he moves along the streets of Germany.

Now, that’s not just the only interesting thing. But in the beginning of the video clip, we see a young lady with blue hair, enjoying the techno music in the background, when some random dude in black totally stumbles into her. Then comes The Techno Viking, to the rescue. Totally not into seeing women taken advantage of, or harassed in any form or fashion. This tall, viking specimen of a man, after he handles the situation. Proceeds to start dancing down the street, with no care in the world. A guy you wouldn’t have thought listened to techno but maybe something a little more noisy, like hard rock or metal or whatever grunge music there is out there, that’s stereo-typically associated with someone of his appearance.

Interesting fact about this whole video clip and the viking dude, is that the recorder of the video, totally got sued by The Techno Viking and actually lost. He actually became nearly bankrupt, after paying out over 23,000 euros. See, The Techno Viking, didn’t like that his image was made famous because of going viral.

Nevertheless, this video that seems typical, clearly had a story behind it or should I say, along with it, that’s apparently very suiting to an image of a muscular viking dancing to techno music.

If for whatever reason you’d like to find out where The Techno Viking is now, check out Waterford Whispers News or if the drama behind the whole video and the recorder getting sued interests you more, than check out Medium.

There’s also an HD version, because, why not?

Apparently, there was a documentary that was made by the same individual who was sued by The Techno Viking – Matthias Fritsch. You can check it out below: