Seeing as season 2 of “Thirteen Reasons Why”, is premiering on May 18th – I have decided to binge watch the first season. I am already on Episode 8, and hope to finish it before the day’s end. Anyone who watched this show, did feel as if it had potential of having a second season, and there were talks about it but finally, it is a reality. I have looked at the trailer, and I am not sure how to feel about it but being as “Thirteen Reasons Why”, season 1, was so good – I have hope that Season 2 will expand on something more and be just as good.

This blog entry isn’t about just talking about how much I enjoyed looking at “Thirteen Reasons Why” when it first premiered on Netflix or how depressing it became as more terrible stuff started happening to Hannah, but rather this blog entry is just to finally speak my opinion on the story line itself. 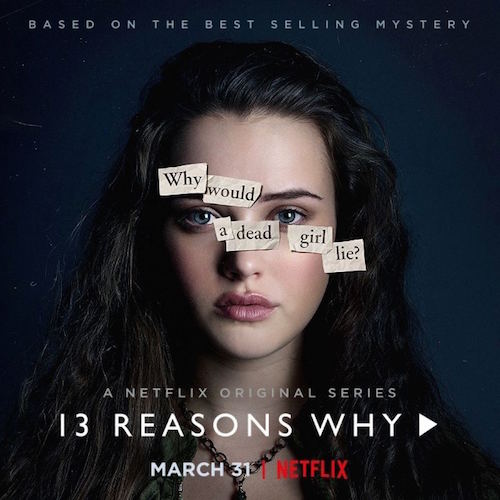 Everyone knows by now that “Thirteen Reasons Why”, is a Netflix original series that follows the tragic life and death of a teenage girl named Hannah. It follows all the drama that goes on in high school; the bullying, to back stabbings, etc., that most people if they weren’t part of the popular group, experienced at least once in their high school career. Not only was it focused on the innuendos of high school, but it also looked at the damage suicide can have on the family members who’ve lost their love one. “Thirteen Reasons Why” followed Hannah’s parents attempt to sue the school and the school district for not being able to handle the situation properly prior to her death.

As for my opinion about the story line; “Thirteen Reasons Why” is terribly depressing. It seems that every possible thing that could go wrong to someone during their high school journey, happened to Hannah. I know this may have been an exaggeration that the writer took liberty to utilize, as it is at the end of the day a show. But, it just sometimes seemed like too much.

Is it that I am oblivious to the extreme depravity that can be someone’s experience during high school when it comes to dealing with bullies, rumors, and shame? Is there someone, some kid out there who’s experiencing something so tragic that this story seems more like watching their life played across the screen rather than just a show about a girl who unfortunately killed herself after feeling as if she had no other option? Obviously the answer to that question would be; yes.

As much as I feel the story line becomes a little over-exaggerated, we all have read news articles on young kids committing suicide because of bullying. So maybe it is over-exaggerated but any one of those points Hannah made, was enough to break down a kid enough so, that taking their own life seemed like a very great solution.

At the end of the day, Hannah’s personal tragedies, is a story that each individual can relate to in some way or form. Her pain, becomes your own as you recall your own high school moments that weren’t so wonderful. A lot of us are fortunate enough to have very mild experiences that can literally be translated to any moment in life and not just high school – people betraying us, talking behind our backs, not being nice to us, etc. But then there are those individuals where it is a constant personal torture, that happens every single day and as teenagers, our teenage life seems forever and never ending. The adolescent mind only thinks of the moments, the isolated situations and never actually sees beyond the “doom”, that is the high school or middle school experience. I guess someone being bullied from since middle school, legitimately will feel despair of thinking the remainder of middle school and then high school, could be something that cannot be managed. How unfair is that? To be a kid, and worried about a doomed life because of other kids being pricks?

Personally and as a way to just end this blog entry before it becomes a ramble of sorts as this topic is such a delicate one, these bullies should be held responsible for their behavior. If the behaviors of these children can drive a kid to end their life, there should be some punishment for their actions. Our society is better than that. Purposely trying to tear someone down for one owns’ personal enjoyment, should be criminal. It is insanely evil to laugh at someone’s pain, or even the recent comments of kids saying “kill yourself”, should be unacceptable. Behaviors like that, is evil and I am glad that the legal system is starting to take notice – Stop Bullying , Bullying At School .

“Thirteen Reasons Why”, is a strong story that needed to be told. It was finally time to stop hiding behind a wall or sweeping these issues under the rug. IMDb, rates this series as a 8.3/10. Personal taste of this show, isn’t biased. It is that good. I cannot wait for Season 2.

Here is the trailer for Thirteen Reasons Why – Season 2.