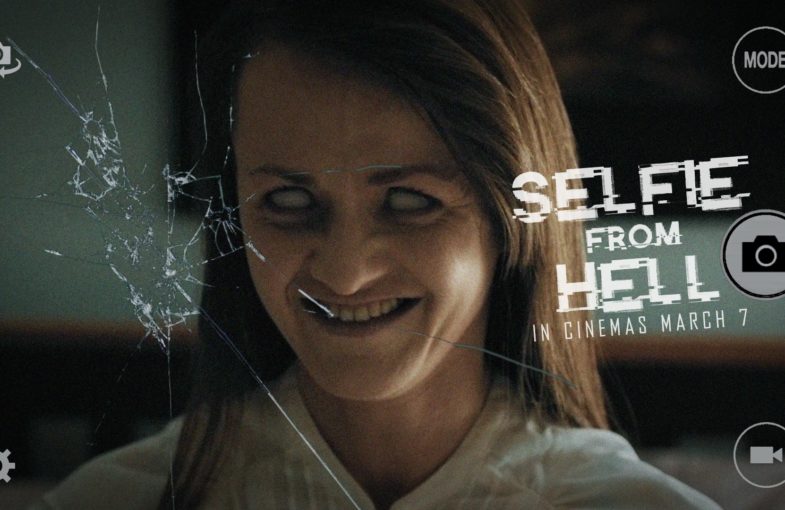 “Selfie From Hell”, is a horror movie starring a bunch of unknown actors, and directed by another unknown person. When the movie starts, the acting is mediocre at best. It felt more like a high school project, rather than any serious film production. But, as the movie developed, so did the acting skills of the actors. As they got more into their character, is around the time that the movie started actually becoming interesting. Unfortunately, the interest only lasted a few minutes as it took the movie a good 3/4th of the way to completion, for that to actually happen.

I did notice one familiar face (sorta, kinda) in the movie, and after doing some research realized he’s the guy that acted in Robocop and credited as “Head of Omnicorp Security” – Ian Butcher. Honestly don’t remember him truly, from the movie but maybe there was some association or something? Or I am probably reaching a lot with that. 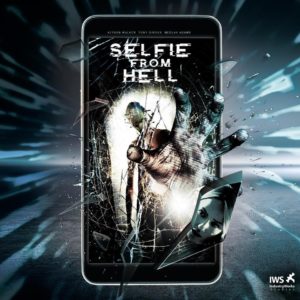 Although it took the movie a pretty long time to really show it’s true potential, the suspense expected from a horror movie, did eventually develop. It is as if the director wasn’t sure how to bring that across throughout the earlier points of the movie, and only really started to dig their teeth into the meat of the story, so they could actually elicit any type of emotion from its’ viewers, other than crazy boredom and regret.

The movie had 1, mild, jump scene. I couldn’t really call it a jump scene, as I didn’t really feel even much of a flutter in my chest, but I realized what the scene was trying to imply. I guess the cheap shots at a jump scene, in a movie that’s amateurish at best, can only be laughable as it’s as cliched as it gets.

It takes you until the end the movie, to also see whatever it is, that’s haunting these people, who take these selfies. Don’t worry, me mentioning a thing haunting people, isn’t a spoiler as this is something that’s shown in the trailers/previews on Netflix. Also, it’s kind of obvious because what else would the story be about, with a title called; “Selfie From Hell”….maybe the worst selfie a person has ever taken? Or a bunch of people competing for the worst selfie one has ever taken? 😂  Yeah, that was my lame attempt at making a joke 😂🤗.  I am actually pretty proud of myself 😋

When the movie was finally over, I did a series of “wtf”? Wondering why I even wasted my time on the movie. It had no sense to it, even though it was one of those cliched horror movies; I recently watched a movie called “Ghost House”, and as cliched as that horror movie was, it made sense. Also whatever explanation they rushed into making at the end, didn’t pan out as much as I am sure they thought it would.

IMDb, gave this movie a 3.2/10 and I honestly think they were being generous. I would only suggest watching this movie, if you just want to get a good laugh, or waste away some spare time – maybe you got a roast in the oven and don’t want to be distracted by something good? This would be the ideal movie for that.

After feeling as if my time was wasted, and I wanted to redeem this upset with something that was potentially cool, I searched up the movie and found something potentially interesting. So, apparently this movie was inspired by the short film of the same name, that was made by the same actress who starred in the full length movie – Meelah Adams who plays Julia, along with director and writer Erdal Ceylan. Erdal Ceylan also directed and wrote the screen play for the full length movie (not a great writer, per say but we all have to start from somewhere!). Apparently Meelah developed this short film as part of her film school thesis, about viral videos. The short film (that runs about 1 minute), was posted onto YouTube back in 2015 and the full length movie was released in 2018. Apparently the short film got over 2 million views, within the 2 months that it was on YouTube. I am sure it has gotten more recently, with the release of this movie. I haven’t checked out the short film and have no interest either.

So despite as disappointing as the movie is, the background to its’ development is at least, some what interesting. Also, while searching up the movie, it was pretty funny reading other people’s reviews, but this one from scariest things, took the cake.

“Selfie From Hell”, is on UK Netflix, if you’re really interested in checking it out! I am sure its’ on other Netflix regions, but I wouldn’t know.

I give the movie a 3/10, as working with decimals, doesn’t make any sense to me.

Previous post:
The Beyond Next Post:
A Fun Challenge – Watch These Lost Horror Movies
about the author: myron