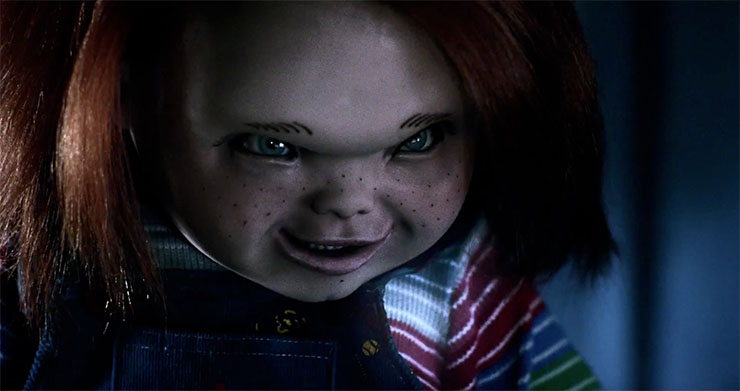 So yesterday I was watching Child’s Play, the first installment to the Chucky franchise, and as with all other 80s movies that I grew up watching, I always wondered where the kid actors are today. With that, I talked about how Andy played by Alex Vincent was now fat and acting in some little movies but nothing grand. I did also decide I’d be taking a look at Curse of Chucky because supposedly, in it he reprises his role as Andy Barclay.

Now, I will have to say though that this movie wasn’t so bad. I even ended up reading some reviews on it before venturing off and watching it, where people talked about the Seed of Chucky, which is another installment that I didn’t even remember existed. From reading that though, it brought back memories on how horrible that movie was. Anyhow, Curse of Chucky, is a movie that’s a continuation of the last installment but gives you a little back story on Charles Lee Ray, that leads up to the first scene of the Child’s Play movie. To be honest though, I feel as if something was dropped, when it came to accuracy. I always thought Charles Lee Ray was running away from the police after a robbery, but based on this movie it was for something else (I am not going to provide any spoilers for those who are interested in seeing the movie). Either way, the movie isn’t as bad as I thought it would be. I would say though, wait till after the credits, to see something very interesting. I was literally watching the movie waiting to see Alex Vincent as Andy, be introduced in some way that incorporates him into the plot of this recent installment. It took a long time to see him, but I literally had to google a wikipedia plot entry to realize I was too impatient to dismiss the movie, in regards to not seeing Andy in it.

Despite the fact though that I say this movie wasn’t bad, it could never be compared with the first two installments. There is something unnerving about the first movies of the Child’s Play franchise. I think there is too much effort nowadays on trying to provide too much scare tactics that are obviously strategically planned and not something that’s made with effort. It’s expected, typical and you can figure out when it’s going to happen. The older movies didn’t have forced scenes to make the person feel a little uncomfortable. I think one of the only modern day movies that has done that for me, is Insidious. I guess I got the feeling they were just trying too hard, like with so many horror movies nowadays. No one is original, no one tries to put much effort into the scare tactics that is a horror movie. That is one aspect of horror, that I miss from the 80s. As any 80s horror fanatic can express with pride, is that they did a very good job at that and up until the 90s, it was genuine horror flicks and not explicit attempts at scaring rather than actually being scary.