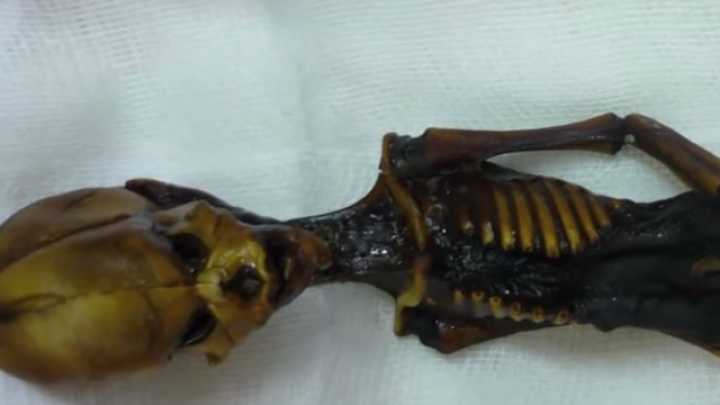 The remains of a person, who’s height has been measured to be about 6 inches, was found in Chile in 2003. The appearance of the remains, mainly the shape of the skull and the height of the specimen, made a lot of people presume its’ origin to be non-human.

A barrage of investigative techniques have been performed on the remains, including DNA analysis, CAT scans and X-rays, concluding that the Ata’s (as it was named), was human. The only problems that arose from the investigation, was that although it could have easily been assumed that the remains was that of a miscarried fetus, the fact that it had matured teeth threw that assumption out the window. In fact, they believed that Ata could have been about 6-8 years of age. But obviously with all the information that’s been acquired from the investigations, a lot of questions have also developed. What 6-8 year old kid is 6 inches tall? As it has been confirmed the smallest ever recorded dwarf was at least 21.5 inches tall. 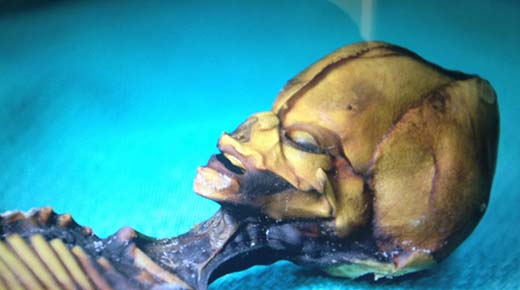 Although, just because we haven’t come across a rare form of dwarfism that produces a height that’s as extreme as 6 inches, for someone who may have been 6-8 years of age, doesn’t mean that it never existed.

So in my opinion, from the information I have at hand at the moment, I believe the Chile Atacama Desert findings, is the result of a very rare form of dwarfism. Possibly one that we haven’t come across in recent times and most likely because of the demographic that it probably affects. If this is a particular deformity that was very rare but with luck we found the remains of one child that suffered and died from this genetic disorder, it is not hard to believe we are completely in the dark when it comes to it. Also, the fact that 9% of the Ata’s DNA doesn’t match the human genome reference, could contribute to the idea that that particular portion may be associated with a particular genetic disorder that we’re obviously not familiar with.

With the knowledge that we have of certain genetic disorders and how they are inherited, we can assume as this kid died from the same disorder that most likely caused them to have a shortened height, the disorder doesn’t allow the individual who’s inflicted with it, to reach child bearing age. That prevents the defected gene from being passed on. We can assume that for the child to be inflicted with the genetic disorder, maybe both parents have to be carriers and that it may have spread via autosomal recessive inheritance. Although the parents are carriers, it will always require a 1/4 (25%) chance that they produce a child with the disease and if it is these parents decide to not try again for another kid, this particular genetic disorder would not come into fruition through another child. Not only that, but we can say that maybe this particular form of dwardfism is not evenly distributed among populations, and afflicts only a certain group of individuals. Kind of like how Beta-Thalassemia is generally associated with individuals of Mediterranean decent; Italians and Greeks. If it is something that was specific to that particular region where Ata was found, it isn’t so far fetched to believe that it is something that we may not have come across in our modern, record-able, time. Or, there could be cases but the medical community hasn’t been introduced to it, as of yet.

But, that’s just my opinion. Either way, we know Ata was human, we just don’t know what they suffered from to reduce their life span to about 6-8 years of age and then also cause them to be about 6 inches in height. Either way, it’s very interesting and would be even more interesting to find out what they figure out, later on in the future.

Previous post:
The very simple, debunking of a Roswell Alien Next Post:
The Cloverfield Paradox connection with the other Cloverfields movies
about the author: myron